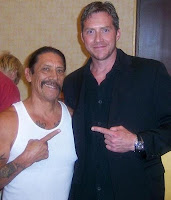 Halloween 2 (2009) by Jack Harrison
Obviously a Rob Zombie film, and that alone will draw someone into watching it. You put the DVD in thinking two things: first - this is another remake, and second - how good is this going to be with a rock star as a new found director. It's not like just anyone can jump into the director's chair and do a good job. However, I have to tell you that I was really impressed with the direction and choices made on this film. I love the use of the young Michael Myers character in the set up. It takes the character out of the supernatural and humanizes him a great deal. After all, most people who suffer from some mental disorder or psychosis usually have early warning signals as a child. I understand the need for the Momma Myers character, but would love to see this guy take on the whole movie by himself. Norman Bates, Jason Vorhees, Michael Myers, etc... are all driven by some weird unnatural relationship with their mothers. I think too much back story on a villain degrades some of their fear factor. You could tell that Rob Zombie wasn't holding back at all on his interpretations of the Halloween franchise nor would he appear to make any apologizes for it either. Near the beginning of the movie a young lady is being prepped for operation in the ER. The cinematography, sound design, special effects, and of course the acting will bring you as close as possible to one woman's suffering. It sets the tone for the movie and prepares you a little for what's in store for you as a viewer.

As an action actor / stunt coordinator, who has also played my share of villains in horror movies, I admire the choices made with the main character Michael. Played by a much bigger and more muscular Tyler Mane (known for Sabretooth in X-Men), the character has an effortless walk and strength about him. I also liked the departure from the white mask and the use of the hooded cloak jacket with a full beard in the traveling scenes. It did kind of remind me of Kane in Kung Fu though... traveling around fighting bad people he encountered. But this grasshopper was 7' tall and carries a monster hunting knife.

I really didn't see many huge stunts in the film. It was a physical film, but not anything too dangerous to shoot. The death scenes were done very well, but relied on great story telling and special teams, like amazing special effects and superior editing. My favorite kills in the film occur at the strip bar and also with actor Danny Trejo; who I met at HorrorFind 2009. He is a terrific guy that I later had drinks with that night at the hotel bar. He told me I should contact Steven Seagal's people about stunt doubling for him. I said, "Steven's getting a little older now, I may have missed the boat on that one." As usual, Danny does a very good job with his character. Rob Zombie succeeded with his vision of Michael. That's the way it's suppose to be done! Also, I like how Michael is unbiased in targeting victims. Man, woman, good, bad, friend, foe, it's all good... you're dead!

The only change I would have made is to lose so much of the dead mother's ghost with the flash back and dream sequences. Also, I wanted a much more mind blowing ending. But I'm a stunt coordinator and action junkie. Of course I think everything should be over the top. Otherwise, it was a great roller coaster ride of a horror movie and well worth the time to buy it and watch it.

Jack is very active as an actor, stunt coordinator and performer and keeps busy with his On 3! Stunt Team. You can see their stunt work HERE. Also check out Jack's Facebook page. If you want to see his work in the movies, catch all the stunts and Jack as his own horror icon Idiot in Fearmakers Dismal and the beast in the Fearmakers Bigfoot movie Savage by going to the Fearmakers Facebook fan page and clicking on the "Shop Now" tab.
Posted by Fearmakers at 6:02 PM