Halloween Nights 6 of 13: Dark Night of the Scarecrow 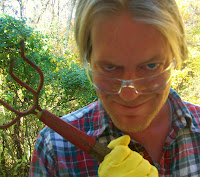 Thespian Mark Van Fossen, who played Billy in Death4Told, reviews a forgotten made-for-TV gem in Dark Night of the Scarecrow.

Dark Night of the Scarecrow
by Mark Van Fossen

It might seem unusual when you find a film that spans the vast cosmos of time and still creeps you out (just by thinking about it) long after the film has gone into the realm of forgotten works.

No reruns, no reminders in idle movie conversations with old friends or in books or articles, nothing.

Especially when that film was a made-for-TV movie that is currently approaching its 30th birthday.

Many years have gone by and many good, mediocre, and bad horror films have gone by with them but Dark Night of the Scarecrow (1981) is one of those rare gems that, surprisingly, doesn’t come up in horror chats too often. It should.

It’s a film that has stood the test of time, for me anyway, ever since it aired as a CBS prelude to Halloween back in the day. I recall watching this film in a strange living room in a strange house in a long-ago era where it seemed most houses lacked a sufficient supply of lightbulbs, almost like a horror film itself… (I wonder as I write this if I’m the only one who thinks of the late 70’s and early 80’s as some sort of half-assed Dark Age? Probably. But everything just seemed dim, and it wasn’t my outlook on life, I can promise you that.)

Directed by novelist Frank De Felitta and written by screenwriter J.D. Feigelson (whom by the looks of his imdb.com photo could’ve been just as comfortable plowing fields as wielding a pen), Dark Night of the Scarecrow is a simple story of revenge set in the equally simplified landscape of rural, cow-infested, corn-overdosed America.

It follows the story of Bubba Ritter (Larry Drake), a mentally handicapped man who is wrongfully accused of attacking a little girl, then subsequently hunted and murdered for it by several ignorant townspeople.Consequently, Bubba’s ghost comes back in the form of a scarecrow (in which he was hiding at the time of his death) and exacts swift revenge on the four men who gunned him down. Simple enough, right?

Also starring Charles Durning, Lane Smith, and Jocelyn Brando (Marlon’s sister) as Mrs. Ritter, the film really is a strange and terrifying look at themes and elements that still stand strong today. Themes of paranoia and mistrust, hate-crimes and disillusionment. These elements just happen to be shrouded in a really kick-ass, yet eerie, horror story.The film, by most standards, is considered a B-Movie and has remained forgotten over the years until a sudden surge of popularity (thank you Internet) has thrust it back into the public eye. By most standards, it’s also considered tame. So if you’re expecting Saw or Wolf’s Creek or something really gruesome and bloody, you might be a little disappointed. The film was finally released for DVD and re-released on television in 2009. (Thankfully George Lucas had nothing to do with the re-release or Bubba the scarecrow would probably have been riding a Dewback… but I digress - again.)

Watching this film again recently, I can immediately see why I loved it as a kid, and still do. The acting is excellent and really sucks you into the story and the elements of terror and suspense are compelling enough to keep you on the edge of your seat. (Thinking about it now, this could very well have been the film that made me a die-hard fan of horror movies and started the imaginative ball rolling - or as some people like to say, “screwed me up in the head”.) Feigelson weaves the tale together with enough suspense and dark sinister qualities that keeps you biting your nails, if not at least thinking about your nails. Or somebody else’s nails. Or somebody else biting you. And the cinematography (for TV-movies of that generation anyway) could possibly be viewed as “ahead of its time”. It was shot beautifully and there are some moments in the film, regarding photography, that still catch me off-guard.

Originally planned to be a feature for the theaters, CBS bought the script and decided to produce it for the small screen under the now defunct Wizan Production Company. (This probably irritated Feigelson, though it shouldn’t, because someone will surely come along and remake it into a crappy feature in the coming years. Reminders of The Fog and The Hitcher come to mind.)

Dark Night of the Scarecrow may not be considered a classic, even with its reemergence and growing popularity, but if you haven’t seen this movie (but love those old creepy movies shot on grainy film) then do yourself a favor and see it. You won’t be sorry, I’m sure. It’s a fantastic little piece with great characters played by some surprisingly familiar faces and carries that air of suspense that may just reach out and stab you with a pitchfork. It’s also a movie that might just “stick” with you. I can confidently say that since watching this movie all those years ago I have never once driven the back roads of Ohio on late Autumn afternoons, past cornfields and farms, and hadn’t thought of Bubba the scarecrow lurking somewhere just off the road, his beady eyes following me, hoping for an engine failure... After all, Feigelson wasn’t dubbed the creator of the “Killer Scarecrow” sub-genre for nothing. So, go see Dark Night of the Scarecrow to find out why and have a Happy (and creepy) Halloween!

Mark Van Fossen continues to act and is actively writing and developing his own projects. You can see him in Death4Told by going to the Fearmakers Facebook fan page and clicking on the "Shop Now" tab.

Posted by Fearmakers at 3:11 PM