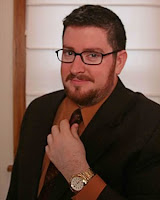 Fearmakers Producer and marketing specialist, Christopher Cook, chimes in and reviews the most recent film yet by our review staff, Predators.

Predators
by Christopher Cook
BAM! You wake up in free fall and have no idea how you got there and what's going on. Where are you? Do you have a parachute? Will it open? Talk about a piss-you-pants loosen-your-bowels moment. Welcome to Royce's (Adrien Brody) world.

PREDATORS, released in July of 2010, is the story about killers who are dropped on an alien planet so they can be hunted by the Predators. Who kidnapped them and how did they pull it off? We don't know.

The killers are clueless as the audience, but they build on what little they know to gain an understanding of the situation and survive. This is the springboard for a story that results in.not much of a story. Who lives? Who dies? Who cares!

One highlight of the movie is when Noland (Laurence Fishburne) makes an appearance. It's a small part, but he knocks it out of the park. GO LARRY!!!

PREDATORS doesn't have much of a story, but it's still pretty fun if you don't have anything else to do and it's on cable anyway. What the hell. Don't buy it on DVD, don't buy it On Demand, but watch it if there's nothing else on. Meh!

Christopher has produced on all three Fearmakers features. To see them simply go to the Fearmakers Facebook fan page and click on the "Shop Now" tab and order your copy today!!!
Posted by Fearmakers at 5:29 PM