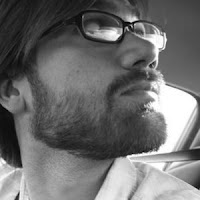 Aaron Moorhead is the talented DP of Strange Stuff's Death of the Dead and a cinephile at heart. He prefers the ugly to the good and the bad and it doesn't get much uglier than Blood Gnome.

Blood Gnome
by Aaron Moorhead
Today I'm going to talk to you about one of my favorite visual travesties: Blood Gnome. This was introduced to me by a friend who found it in the dusty corner of Blockbuster's preowned bin. He paid six dollars. I paid the same to own it. I had to.

Blood Gnome is a horror movie that is about an eccentric reporter who is hunted by a group of interdimensional goblins that are invisible to the eye until you look at them through a video camera or you taste their blood, and they only attack if you're having strange bloodsport sex, or if you're the main character. They attack you by knocking things over or putting tiny cuts on your arms or legs. Damn, I just made this movie sound good.

Put simply, this movie has no redeeming qualities except for the occasional boob. The main character discovers everything by talking to himself, the cops are always "plainclothes with badges", and rarely does one event logically lead to the next. But even greater is this: the production values are the absolute rock bottom that I could possibly find on a movie with relatively mainstream DVD distribution, which is the whole point of my purchase and this review.

The whole work is shot on some kind of low-end digital camcorder, but not like Paranormal Activity where it's a choice. It's shot with standard setups: over-the-shoulder, reverse, wide, that is to say, it's not meant to be verite. It's the camcorder they had lying around before they decided to pick it up and make a movie. The lights are often in the frame. They are 500 watt worklights from Home Depot. The composition is never good, the sets are definitely the apartment buildings of the producers, the actors are their buddies, and this was shot on free weekends on-and-off for, oh, my bet is three weekends. It looks and plays like the movies that you shot in high school. For ninety minutes.

Here's why this is important. This movie is on the shelves, being watched by people who saw the cover art and decided to buy and/or rent, and is being reviewed by condescending losers like myself. It's visible, it's accessible, and at least two people have bought it, probably completely offsetting their production budget. But seriously, they made this movie quickly and haphazardly, unlikely to have made a film before, and with the worst possible final product, they still got a distributor to throw some money at it and the world can now see their work.

It's not as easy as it was to get distribution when this was made, but one will have to work hard to make something this bad anyway. They had a helping hand up to distro by throwing some boobs and blood, but ultimately the lesson to be learned here is this: if Blood Gnome did it, so can we all.

for taking the effort to actually complete the film

You can check out more of Aaron's work at PLP Films and pick up a copy of his beautifully shot horror / comedy / action masterpiece Death of the Dead by going to the Facebook fan page and clicking on the "Shop Now" tab.
Posted by Fearmakers at 11:15 AM