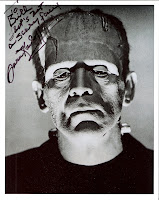 Okay we're going to kick off our 13 Halloween Nights with an oldie but a goodie, the dawn of Universal Horror, the spawn of a career and major studio... Frankenstein (1931), reviewed by Dismal baddie Bill Oberst, Jr.

FRANKENSTEIN (1931)
by Bill Oberst Jr.
I met Sara Karloff (Boris' daughter) at an old bookshop in Hollywood this year. She was nice enough to chat and to autograph a glossy of her father as Frankenstein's Monster. In flowing script she wrote on it “Bill, that's not a scary face!”

She was being kind. We had talked about my own career in horror films like DISMAL as the guy with the scary face, and she sweetly reassured me that I didn't look scary to her.

But looking at the photo now (hanging in its place of honor beside the lobby card from DISMAL's screening at Horrorfind and my signed pic of the late great Forrest J. Ackerman) the inscription seems to me an eloquently concise review of the film that made her family name forever synonymous with horror. There is her father's starkly bony face peeking through Jack Pierce's make-up, artfully lit for maximum menace by the Universal Studios Publicity Department. Yet through the layers of cotton and collodion, just beneath that great massive brow, there are those eyes; those watery, sad eyes; both haunted and haunting; those lonely human eyes set deep within a monstrous visage. I see it and I love that monster. I think to myself, “No, that's not a scary face. The scary faces belong to the ones who created you, the ones who hated one and the ones who hunted you.” And therein lies the genius of the original 1931 version of FRANKENSTEIN.

It isn't a great film. James Whale, a stage director at heart, uses medium and wide shots for major scenes so often that you want to strangle him while screaming, “Punch in for a closeup, damn you, punch in!” Tod Browning (director of FREAKS and Lon Chaney's lost vampire film LONDON AFTER MIDNIGHT) was Universal's original choice when Chaney was up for the role, but when The Man Of 1,000 Faces died suddenly, Browning left the project and moved to DRACULA, which arrived on screens first. One salivates thinking of the darker atmosphere Browning would have created had he helmed FRANKENSTEIN. Browning hated comic relief bits like the silly toast Baron Frankenstein makes at the end of the film. So did Chaney. Their collaboration on Mary Shelley's self-proclaimed “little ghost story” might have been less ripe for ridicule and fresher, even after 80 years.

But then, we wouldn't have Karloff. He is the reason to invest a little over an hour of your time this Halloween to a jerky old black & white artifact of 20th century cinema. Forget the others' overwrought performances (excepting Dwight Frye, who is quite good as Fritz.) Forget the ensuing decades of satire and parody and sequels that destroyed the character of The Monster. Forget it all. Turn out the lights, turn off the phone, and wait. Wait for Karloff to appear. And look into those monstrous, hating, pleading, frightened and ever-alone eyes.

And ask yourself, “Is that a scary face?”
Bill gives Frankenstein (1931)

Bill Oberst, Jr. is one scary badass. You can see him in one of his finest roles playing the uber creepy Dale in Fearmakers' flick Dismal. To get your copy of the DVD just go to the Fearmakers Facebook page and click on the "Shop Now" tab.

You won't be disappointed! You got Dale's word on that!

Posted by Fearmakers at 5:47 PM