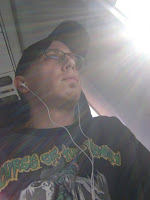 House (2008)
by Jerime Kenne
House (2008) Is the story of one couple with some marriage issues and another couple with just plain issues. Both couples have car trouble and end up in the same backwoods B&B one dark and stormy night. Soon they are introduced to the residents of this creepy B&B. Adding insult to injury they soon find out they are locked in with this overly odd family while a psychopath waits outside for them to fulfill his request of one dead body by morning. During the course of the movie you find out each person is dealing with their own personal hell due to their past transgressions and how they try to work through them. The movie ends with people dying and a twist that you will probably see coming.

I picked house for a few reasons, it’s considered an independent and because it has a nice marriage of practical and visual effects (VFX). This movie has about 150 VFX shots, and for the most part all of them are pretty good. Like any marriage sometimes there is trouble and this film is no different. I’m not going to bore you with a nerd rant about VFX so you’ll just have to see for yourself. Michael Madsen, Leslie Easterbrook, and Bill Moseley do make great additions to the cast when they are on screen making House a fun watch. I would RedBox it or Stream it from NetFlix if you get a chance.

Jerime continues to do visual FX for film / TV. He has another project coming up with Strange Stuff called Attack of the Alien Jelly Monsters From the Depths of Uranus. You can see his other work in Fearmakers' features Dismal and Savage as well as their sub-division Strange Stuff's Death of the Dead by going to the Facebook fan page and clicking on the "Shop Now" tab.
Posted by Fearmakers at 6:24 AM