Bill Oberst Jr. is a Christian, having portrayed Jesus Christ at Precious Blood Catholic Church, but right now industry executives are taking note of his work in horror movies, many of which you can find now at Red Box locations across the country.

"Take This Lollipop" garnered him a Daytime Emmy. If you know horror genres, you know this is the year Jonathan Frid died, having been born in 1924. Oberst has studied horror since he was a kid.

"I’m in South Carolina doing A Christmas Carol at Brookgreen," he said.

Jason Zada directed "Take This Lollipop" which was an innovative thriller Oct. 27, 2011 with more than 13 million "likes" and more than 100 million unique hits on the Internet.

The daytime Emmy is presented by the National Academy of Television Arts & Sciences I nthe category of "New Approaches-Daytime Entertainment." It beat out Ellen, The Today Show and The Bold and The Beautiful. Ever had a nightmare about a cyberstalker? Watch this flick. 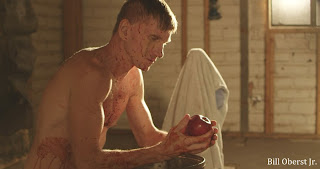 You are walking down a dark hallway and see movement from the light in a room. There is a man hovering over a computer, typing. It is the Georgetown native, showing his dirty fingernails.

He puts in his password at Facebook, and you get a close-up of Bill, sweating. There is weird music, and Bill is agitated. He starts looking at addresses, then he looks at the screen, at you.

Since he is a native of Georgetown, he wants to get the word out, and he is excited about this show.

The one-man show begins a national tour in the spring. Oberst was named "The King of Indie Horror" by the U.K. horror fan site Erebus Horror in March. He arrived in Los Angeles four years ago and has been in more than 80 film and TV credits.
Oberst performed "Pillar of Fire" by Bradbury in Bradbury’s hometown of Waukegan, Ill. Halloween weekend as part of the Ray Bradbury Storytelling Festival.

All of the tales are "profoundly strange," he said. "I’m doing Poe, Lovecraft and Bradbury in their own words, using the exact texts that they wrote," he said. "That’s important to me. I fell in love with language at an early age. I’d be so happy if one young person was taken enough with hearing those words to read more of these authors, or if one adult was inspired to go back and re-read them. That would be enough foe me."

CNN called him "an emerging horror icon" in a profile this summer. He received a Golden Cobb Award from the National B-Movie Celebration Festival as Best Rising B-Movie Actor beating out Tom Sizemore and Joe Esteves. He won a Best Actor Award at Hollywood’s Shockfest Film Festival for his lead role in "Children of Sorrow."

"I'm humbled and a little nervous to be previewing this show in my hometown" say the actor, "but I've loved the Strand Theater since I was a kid. Besides, it's sort of a good luck charm for me. I previewed 'An Evening With Lewis Grizzard' at the Strand in 1999, and it went on to run for a dozen years and 2,000 performances on tour. I'm happy that my home folks are willing to have me there."

Poe wrote some of his work in South Carolina.

"Poe was stationed in the Army in Charleston at Fort Sullivan," said Oberst. "He wrote a short story called ‘The Gold Bug.’ It was set down there. He’s definitely got connections to the South."

Oberst was the director of the chamber of Georgetown County, he said.

"I performed Jesus in churches and all up and down the coast," he said. He gave a stirring performance of Jesus at Precious Blood Catholic Church.

He attended USC and the College of Charleston. He did theater for 14 years. His first live performance was in high school, Winyah High.

He has just been signed on to do the movie "Cell Count 2."

If you know the horror world, you may already know that "Cosmopolis" will be out soon on DVD with S.C. native Will Patton doing the voice on novelist Don DeLillo’s super-strange book. Robert Pattinson of the "Twilight" series stars as a billionaire who lives in a futuristic world, losing his fortune.

Patton stars in the TNT series "Falling Skies" as Captain Weaver. He is proof that a Charleston native can make it in Hollywood, having already climbing his way up from the N.C. School of the Arts, The Actor’s Studio, "Dillinger" and "The Assault on Reason" voiceover.

Oberst said anything he does he wants God to be involved in. 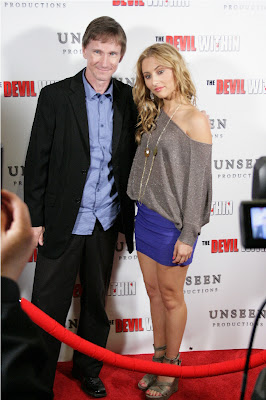