Lisa Wilcox, star of Nightmare on Elm St. 4&5 and Fearmakers' creature feature Savage, and Fearmakers' own Bo Buckley will be on a panel to judge the Makeup Wars at the Horrorfind Weekend 11 convention. There will be 6 teams of makeup artists competing. Each team gets the same makeup kit, same parameters and one hour to complete their creation.

Bo has plenty of experience in makeup fx, having graduated from the Art Institute of Pittsburgh specializing in makeup fx. And Lisa is no stranger to the makeup arts, having appeared in a number of horror flicks including working side by side with THE Freddy Krueger himself. She knows good monster makeup when she sees it.
Posted by Fearmakers at 10:51 AM No comments: Links to this post

Dismal is up nearly 19,000 % in popularity this week. That's right. NINETEEN THOUSAND PERCENT! Out of over 500,000 films Dismal is ranked #173 in popularity. Pretty outstanding stat for our little film. Kudos to everyone who helped make it possible.

If you've seen Dismal, please click on the link and rate the movie. If you're not registered with IMDb.com it's simple and free and no spam. And if you feel inclined give the movie a review. We'd love to hear your take on it.
Posted by Fearmakers at 11:45 AM No comments: Links to this post

Lots happening this year for Fearmakers. First we release Dismal to the world and everyone knows "You've got Dale's word on it". Then we added a new logo and name (no longer using "Studios"). Now comes the latest for Fearmakers in 2009, the new website. All the movies, all the pictures, the news and even games! I know, it's crazy talk. But that's what we've done. With the help of the fine developers at Mad Hatter Design Studio we have a brand new site with tons of content. A one stop shop if you will. Check it out. And we'll be adding more soon. More games, more swag and of course, more movies.
Posted by Fearmakers at 8:13 AM No comments: Links to this post

They Call Me Lance 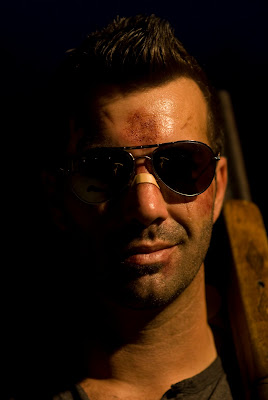 The man, the myth, the legend, Lance Steel is one badass monster hunter. In the upcoming weeks we'll unveil a short preview of Lance Steel full of menacing monsters, hot women and smoking guns. "This film is going to be a lot of fun," says Producer Bo Buckley. "For everyone else it's going to be a lot of work, but I sleep mostly during production."


Lance Steel will mark the directorial debut of Fearmakers producer Justin Soponis. "I'm not nervous at all about directing my first film," says Soponis. "But just to be sure I've ordered my own personal honeywagon (aka movie set toilet) to be near me at all times."

Lance Steel: the prequel will premiere at the Horrorfind Weekend Sept. 25-27.
Posted by Fearmakers at 11:03 AM No comments: Links to this post