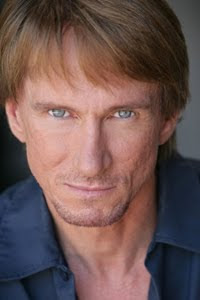 The new site bzzzline.com was developed to bring attention to up-and-coming artists who appear in somewhat obscure and maybe even scarcely seen movies and shows and bring them to the forefront where they deserve. Artist #1? None other than Dismal's own Bill Oberst, Jr.

Bill has long been known as the fabulously disturbing Dale in Fearmakers' swamp cannibal flick Dismal to the thrones of fans who have followed the film's progress from the first premiere at Horrorfind Weekend as it gathered up more fans via its run On Demand and airings on Showtime and The Movie Channel. Now out on DVD, a whole new world of fans has opened up to Bill Oberst, Jr. We always new he was good, now so does everyone else.

Bzzzline.com says, "[Bill's] ability to scare an audience makes him a rising star in the cult film scene, and he will definitely break through that glass ceiling soon." We think so too.

Check out Bill's kick ass performance in Fearmakers' Dismal on DVD now.
Posted by Fearmakers at 8:09 AM