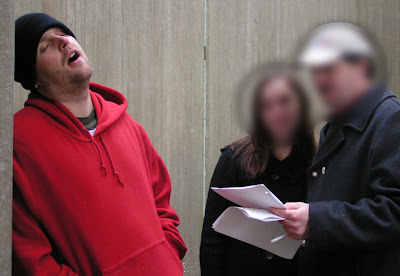 Back in the day, before Justin Soponis was a bigshot feature film producer, he was known as "Supie". As he began his climb to super stardom, he produced a short called Pestilence. As you can see from the above photo, he gave this project the same care and attention as he does with Fearmakers' projects today.

Note: the faces of the two filmmakers in the photo have been blurred to protect their identity for future denial of any associated with Justin "Supie" Soponis.
Posted by Fearmakers at 8:44 AM