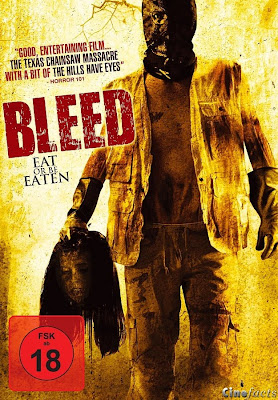 German horror lovers (and we know there are a LOT of you!) are preparing to feast on the indie American horror flick, Dismal. They released their own fine artwork (see above) of a body double for Jack Harrison aka Idiot carrying the severed head double of one of our female cast members (we won't say who). Very classy work, fellows! And they even changed the name of the film! BLEED! Hmm, how do we feel about that? Well, it's not much different from some of the titles we nearly used for the US release like I Bleed On Your Grave, or The Bleedened or If It Bleeds We Feeds, and my favorite Tubs of Blood. Not sure Bleed is as catchy as those titles, but who cares as long as our German horror friends enjoy the movie.