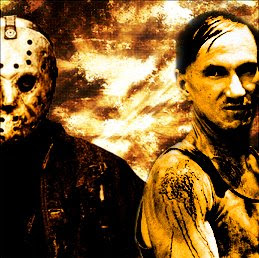 Tuesday marked the DVD release of Hollywood's remake of the horror classic Friday the 13th. With a budget around $19M this remake had about, oh, $18.5M than the original. But did all this extra coin make it any better? No. Did names like uber producer Michael Bay behind it make it better? Nope. In fact, I'd go so far to say this slick remake isn't any better than our own Dismal. I'm serious! Would I go so far as to come up with that snazzy little artwork above if I didn't think so? Stay with me here.

I saw a lot of Dismal in the Friday the 13th remake, kids hiding out under something while the bad guy walks by (one girl even clutching her mouth shut), one kid caught in a bear trap, the big baddie appearing from the shadows behind the unsuspecting victim, even the gratuitous sex scene where the couple think they hear something in the woods. If their movie didn't come out first I'd say those bastids stole from us! Technically we premiered our film in August 2008 about 6 months before Friday the 13th came out, but I'm pretty sure Mr. Bay wasn't in the audience.

F13 uses the traditional scare tactics and setups and wraps it up in a pretty package, and rightfully so, they had nearly $19M more to do it. I can make a REALLY pretty package for $19M. I'd just be spending a lot of time in Tahiti thinking about what that would be. But when you watch Dismal, and I hope you do, you'll realize that we did pretty much the same thing they did but for a lot less money.