You got Bill's word on that

From folks that make horror stories, you'd be surprised at the REAL horror stories that goes on behind the scenes. Tales of disgruntled crew, diva cast and nightmarish directors just to name a few, it's no surprise to read the rumors of actors being recast in once-in-a-lifetime roles for being hard to deal with. Friends in the business tell me how certain actresses were diva witches (you know which letter to replace) on set and made life unbearable. If people really took time to reflect and realize that their ability to work in this industry, and be successful, is a gift built on the world's use of expendable cash for pure entertainment, not a necessity like food, clothing or shelter. They are not saving they world, they are giving us a needed laugh, a hair raising thrill or even a good ol' fashion scare, but it's not a necessity.

Perhaps they should listen to Bill Oberst, Jr., the talented actor who played the psychotic cannibal, Dale, in our feature film Dismal. Not only is Bill terrific in the movie, he's probably one of the nicest, most genuine people you'll ever meet. Bill not only works hard at what he does, he embraces each and every moment and seizes every opportunity he has, because Bill knows tomorrow is promised to no one. 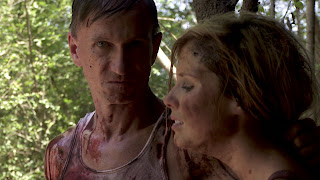 A few days ago, a neighbor whom I had never met came to my door and asked if I would sign an autograph for her daughter. I had appeared in a kids' show back in the day and for those of you who do not know, you shall remain none the wiser, but somehow this child had learned that I had been in one of her favorite shows. Mind you this was about as trivial of a part in the show as one could get enough so I didn't even get credit, but to this young girl I was somehow important enough to get an autograph. I was as humbled as I was embarrassed and I gladly signed the paper for her. Now I'm just a guy who produces little movies and sometimes get shown and people get to see them. When that happens I am humble and grateful to have had that opportunity. When I read Bill Oberst's blog and see how grateful he is to have had the chance to play Dale in Dismal, I am once again humbled by his words. And anytime I'm asked for my autograph, whether it be on a copy of a movie I wrote / produced or on a spiral pocket notebook, I am humbled, because in my eyes the people I'm giving it to are much more important than I am, and you can see that is the same way Bill is. No one owes it to us to do what we do, we are just thankful we have been given the opportunities.

If all actors / filmmakers could be as humble and loyal as our dear friend, Mr. Bill Oberst, Jr., this world of filmmaking would be a kinder, gentler place.

Email ThisBlogThis!Share to TwitterShare to FacebookShare to Pinterest
Labels: disl