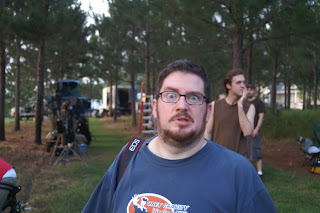 the hypnotic stare of Christopher Cook

Producer and Director of Marketing, Christopher Cook, is celebrating a birthday today. He won't give out his real age, and rumor is Christopher Cook is a stage name anyway, but he does confirm that he is FINALLY legal and wants all the sexy young women and men to know that.

Few people know this but when Christopher was born he was dropped on his head... twice... on purpose. But that only partly explains the way he is. Christopher has been with Fearmakers for 7 years now, back since the early days of Death4Told (please don't bring that up). We saw him roaming the streets looking desperate so we decided to bring him in. And like a lost puppy, he hasn't left us since.

In the time he's been with Fearmakers, we've seen Cook move to California, get married, kick three drug habits and get a tattoo near his sphincter that says "Exit Only!" It has been quite a run and we're glad he's part of this dysfunctional team. He fits right in. Happy Birthday, Christopher!
Posted by Fearmakers at 6:36 AM